Hoping that I’m not too late to recommend you guys this kdrama, Clean with Passion for Now, as it is already in the middle of its run. I initially scrapped my entry for this because some of the storylines were a little bit disappointing and messy, but it has tidied itself up in the succeeding episodes enough for me to give this show a chance for a clean slate. 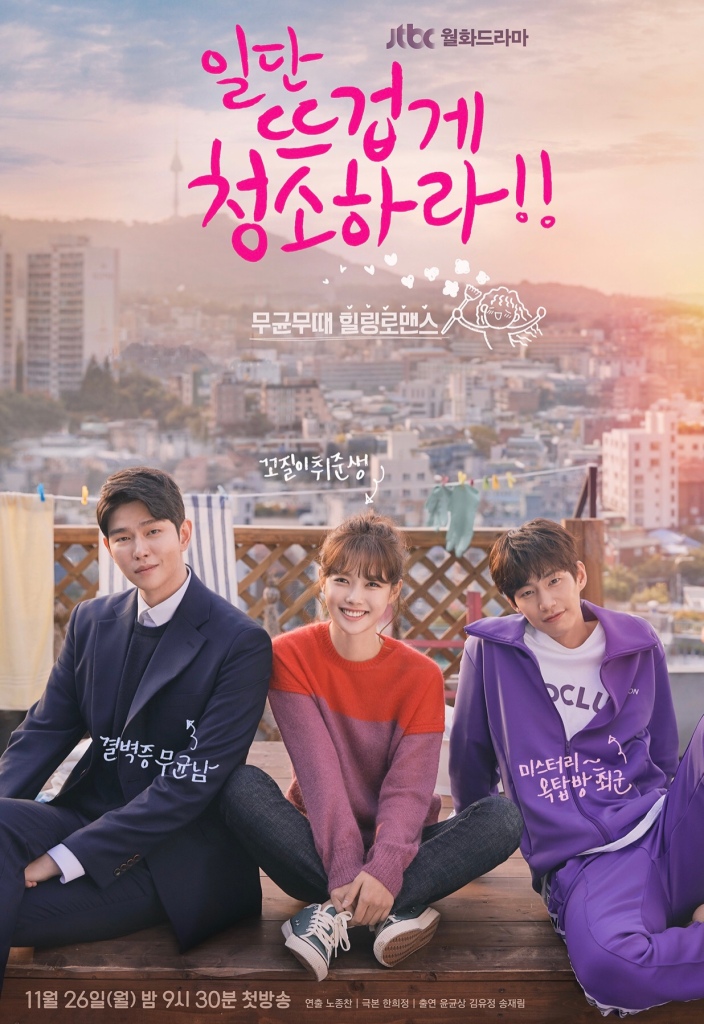 The show is about Gil O Sol, a 20 something girl looking to find a job and be part of Korea’s workforce. She has a good personality — warm, friendly, but does not have the best track record when it comes to hygiene. With food stains on her clothes and showering only when really needed (Stinky alert!), she wasn’t able to land a traditional office job but instead, she is hired as a cleaner at a cleaning company called “Cleaning Fairy”, owned by CEO Jang Seon Kyol (Wearing a suit in the poster above), who happens to have mysophobia (fear of germs). He is a germophobe — he literally has several sinks in his bathrooms where he washes his hands sequentially, wears gloves when he needs to touch something unsanitized, and so on. They get entangled in each other’s lives with O Sol getting into all sorts of trouble with Mr. Jang and testing his limits of cleanliness. Is she the key for Mr. Jang to overcome his fear of germs? We’ll have to wait and see.

Before you read further, please be advised that I’ll be talking more about the story and can serve as spoilers already. You have been warned 🙂

Like a true romantic comedy, Clean with Passion for Now has a love triangle angle, with the second lead being O Sol’s rooftop neighbor, Dr. Daniel Choi, a renowned psychiatrist who Mr. Jang happens to be consulting with. Dr. Choi pretends to be a jobless, friendly neighbor as he hides his true identity to both leads. He’ll eventually confess his feelings for O Sol and reveal himself truthfully. At this point, I am also afflicted with a condition, dubbed “Second Lead Syndrome”, defined as liking the second lead more than the intended main partner of the leading male/female.

I mentioned above about being disappointed because there was one scene where Gil O Sol kissed her CEO, Mr. Jang, as an attempt to prove to her ex crush by then that she was in a relationship with the former. I get that it’s a romcom thing, girl kisses boy inappropriately, but sparks fly between them. But in real life, that is not acceptable in any circumstance. This is grounds for dismissal or even harrassment as an employee kissed his/her boss on the lips. Also, it’s a common theme in korean dramas for the male lead to be initially mean to the leading lady because they are apparently in denial of their attraction/feelings towards the girl but come on, there’s really no reason to be rude! How about the second male lead who is almost always the kinder and more caring from the moment they meet? I’d like to see them win over the girl because despite the male lead really having a heart of gold, the second male lead already showed that same compassion and respect right from the start. Clean with Passion for Now applies this plot device to a tee and as much as I adore the chemistry and interactions between O Sol and Mr. Jang, my heart goes out to Daniel Choi! ❤ Sorry for the supposed to be short rant that turned into a minor fan rage, hehe! This kdrama is still worth your time as the heartwarming moments between O Sol’s family, the friendship of O Sol’s Cleaning Fairy team, and underlying themes of social acceptance, workforce woes, and journey of self discovery are factors that make the show a great watch. This kdrama is not perfect but a little grime and plot clutter can always be cleaned up with better story development and a passion to provide viewers with quality entertainment.