Now that the cat’s out of the bag, how will Hae Ryung and Price Lee Rim interact with another now that she knows his true identity? There’s never a dull day working inside the palace and this week’s episodes will further challenge our ladies’ determination to remain historians.

An arrow is shot in between Prince Lee Rim and the assailant interrupting their tension. As the latter runs away, Hae Ryung goes to the Prince as he faints from the encounter. It’s Mo Hwa who catches up and fights with the killer, she manages to put a dart on his knee and narrowly escapes. 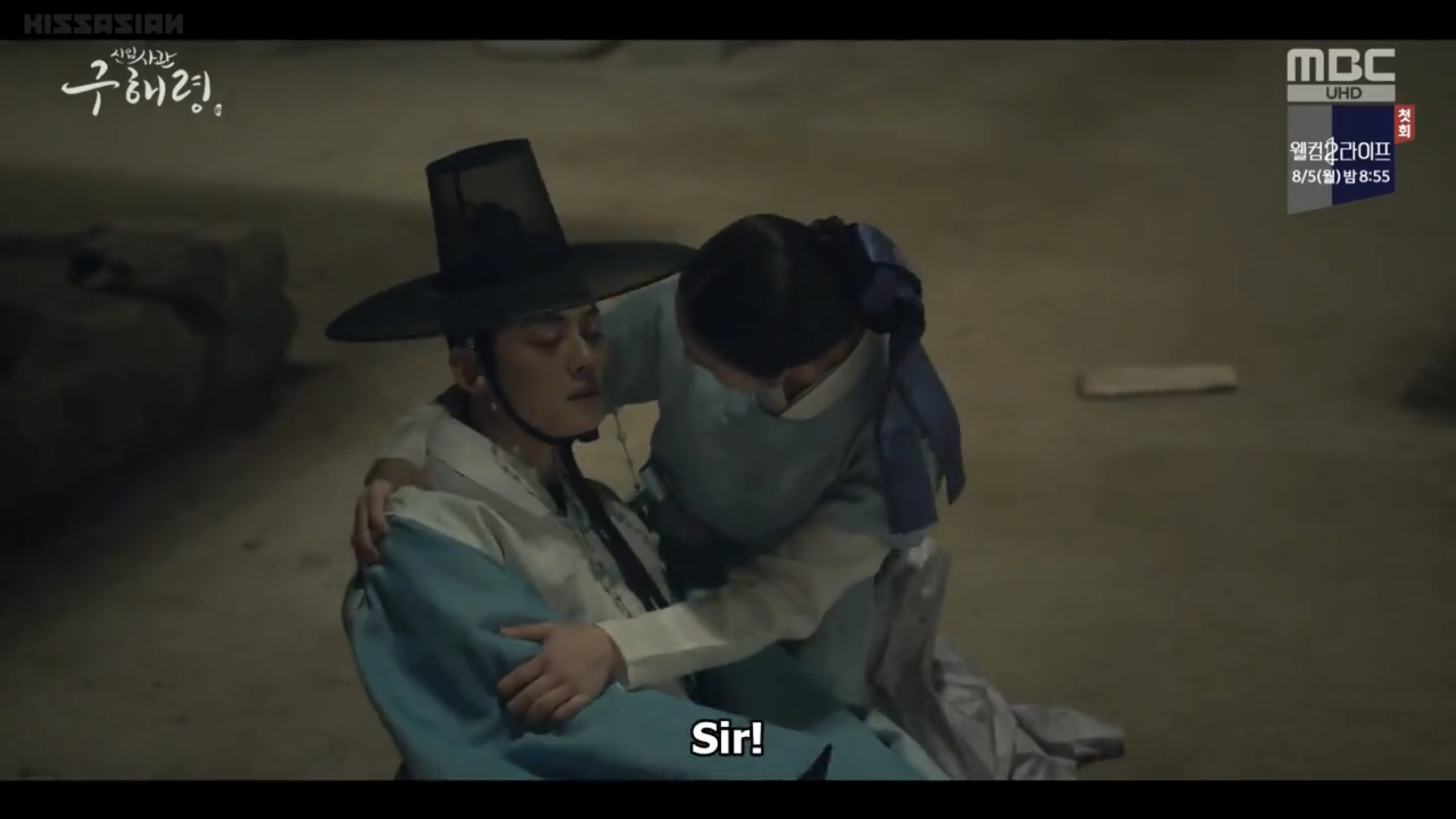 The assailant reports back to the Second State Councilor and another advisor and he tells them that he met Prince Lee Rim awhile ago. Although the latter scoffs at this story, the former mulls it over and concludes that the Crown Prince must have someone new to do his bidding. He hatches up a plan that will put his idea of having female historians into play.

Prince Lee Rim also reports his encounter to his brother after leaving the apothecary due to Hae Ryung bringing him there. I’m glad that he’s now taking more interest in bigger matters and hope that his character slowly matures into a more responsible person moving forward. Prince Lee Rim is wary from what just happened along with banned books fiasco, he declares that the book (The Story of Ho Dam) must be the main culprit. The Crown Prince tells him not to find out about the book further and orders him to back down much to the Prince’s distress. 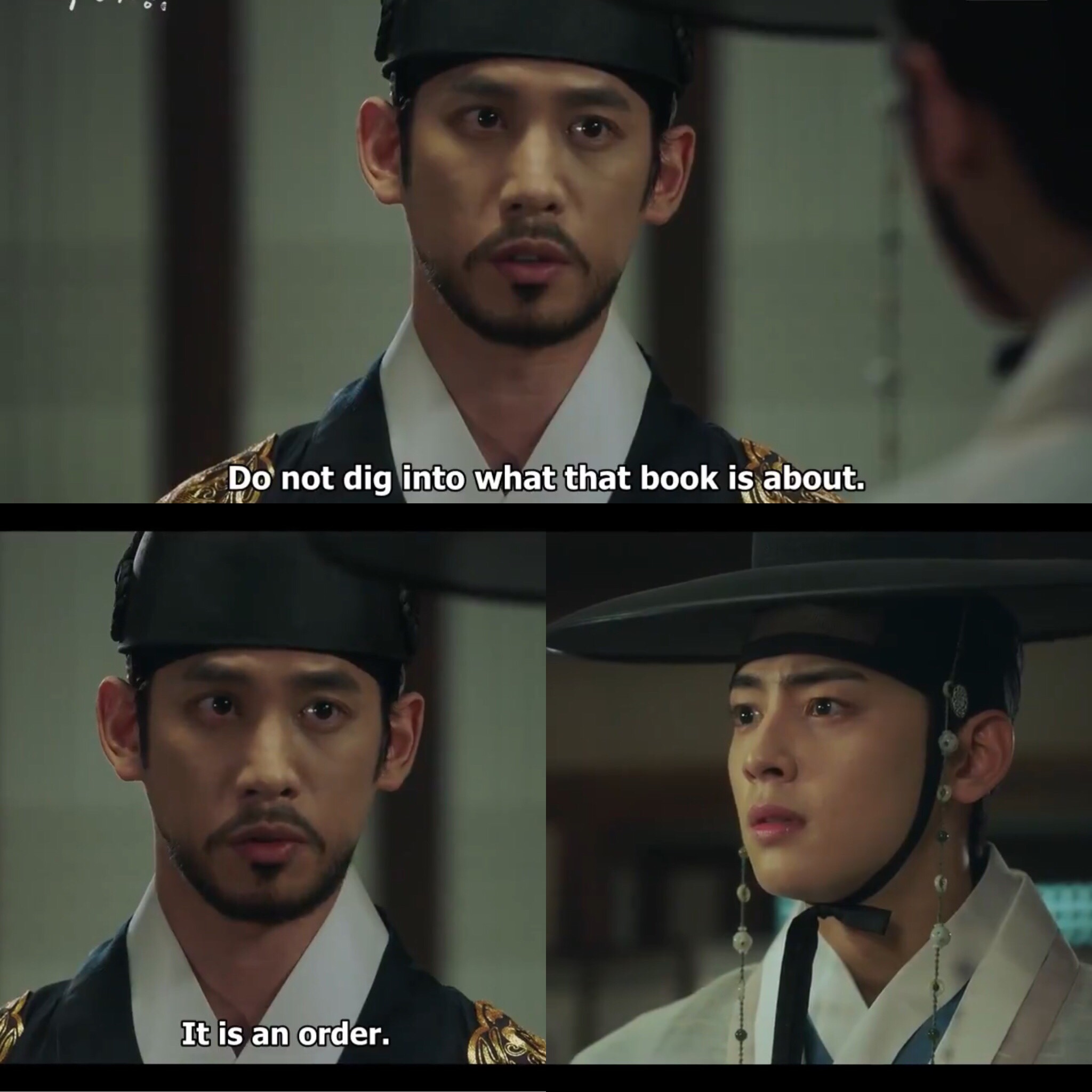 Officer Yang is furious about the decision from higher ups to have the ladies work at the Inner Palace starting today. Eunuch Sam Bo barges in Nokseodang to warn Prince Lee Rim of this development so he can conceal his identity if Hae Ryung is the one that will be assigned to record his daily tasks. He calmly declines and prepares to reveal himself to her. Hae Ryung also seems nervous before meeting him but I suppose both of them have the same thought of wanting to get this issue of hidden identities over with. As she introduces herself to Prince Lee Rim, they lock eyes and gaze upon each other firmly. 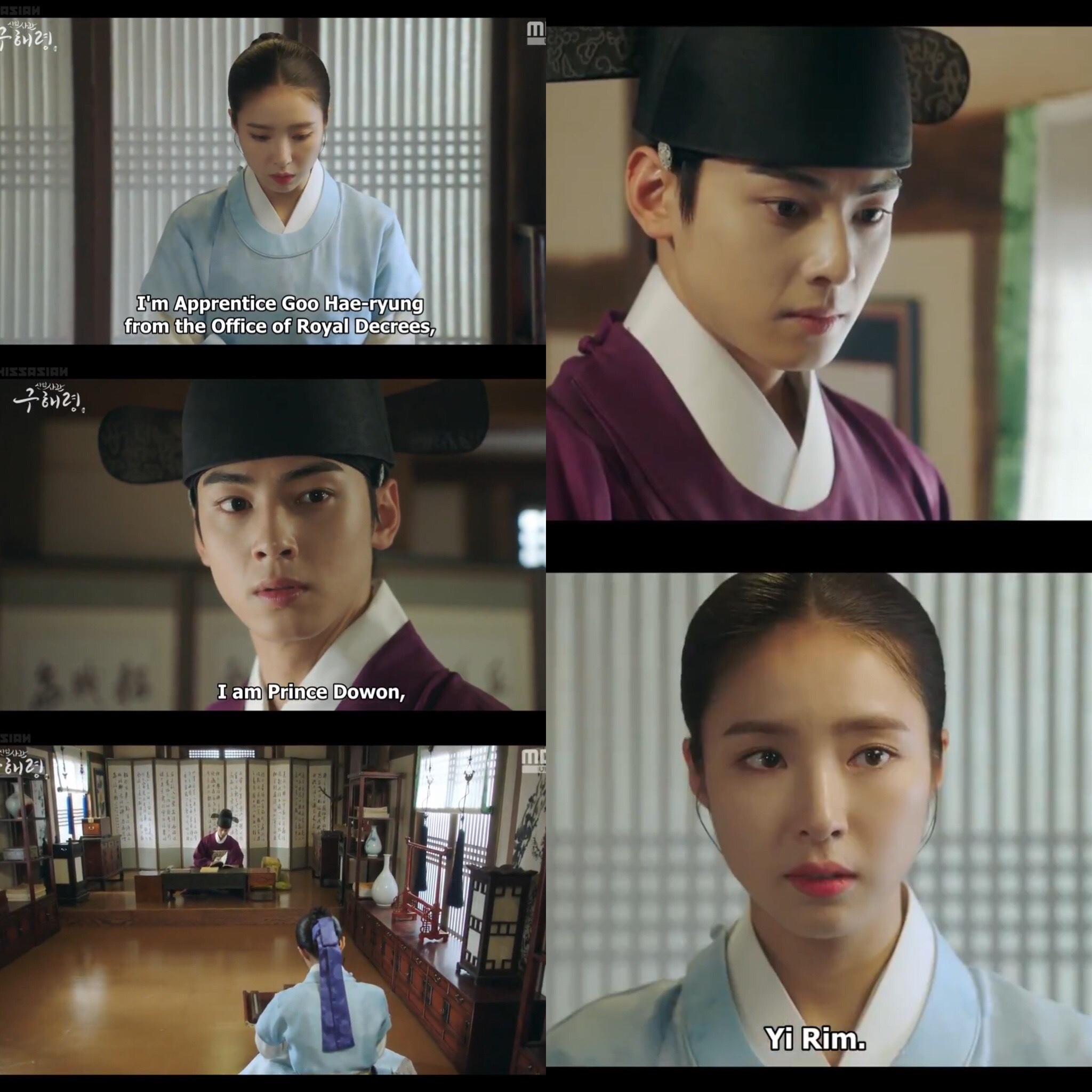 The other 3 girls are assigned to their respective posts ranging from the Crown Prince, the Queen (The King’s wife), and the Queen Dowager (The King’s mother). Mo Hwa visits the Queen Dowager in her chambers and she informs her of the incident at the book printing site. The Queen deduces that this is all the Second State Councilor’s doing. 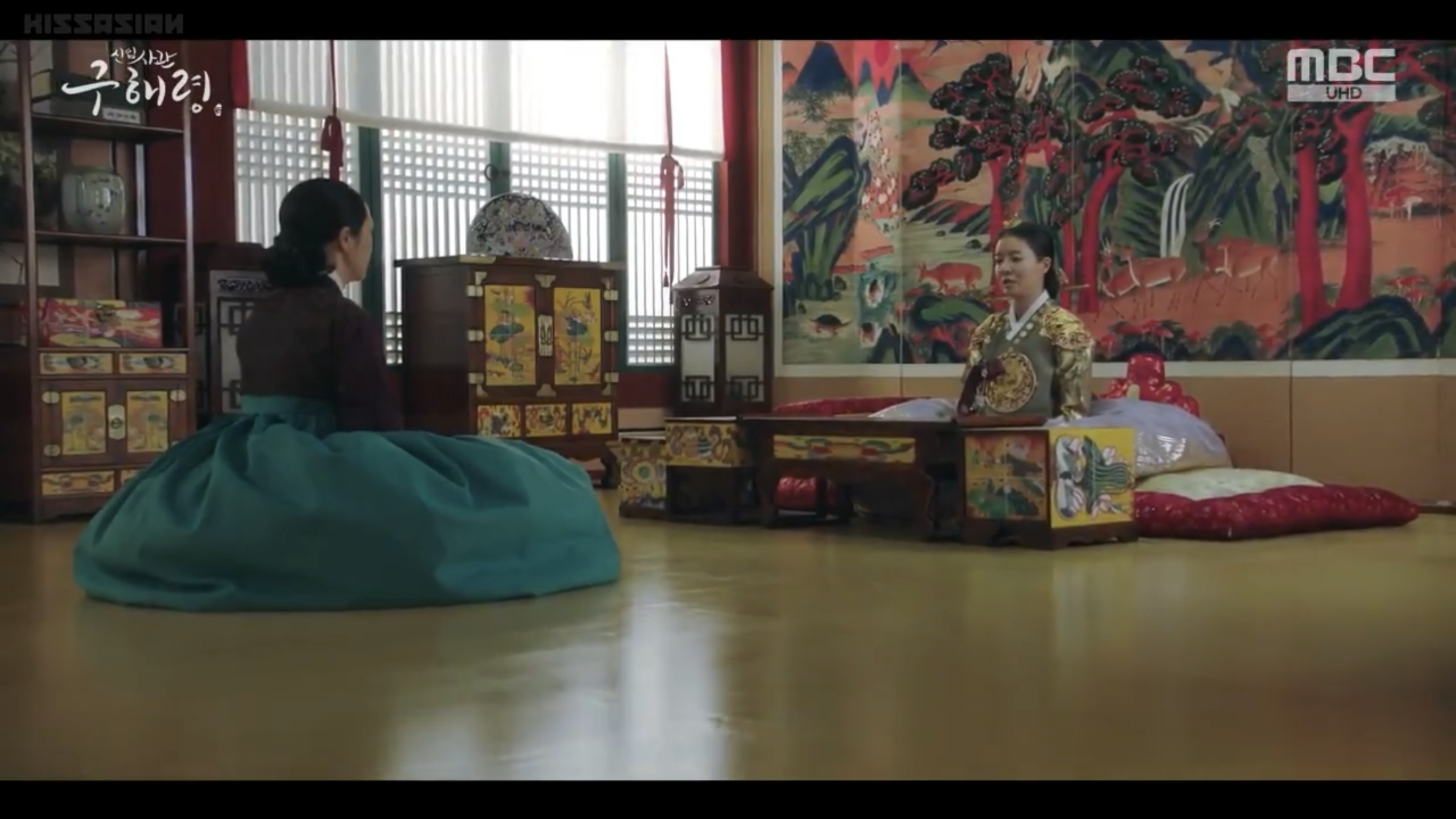 It’s a bit awkward and quiet between Hae Ryung and Prince Lee Rim until they go back to their natural interaction of bickering with each other. Before she could leave, he thanks her for not leaving him last night. She looked surprised as she was expecting him to ask for an apology and beg him to spare her life for knowing that he is a Prince. It’s a tender moment between them and I appreciated the fact that he was the first to wave the white flag as a truce between them.

Jae Kyung is seen standing before a house at night. On the other side is Mo Hwa and she senses that someone is outside. Although they don’t meet, he gazes at her longingly. That is a look you give to a past lover, oh boy. Now I know why Jae Kyung seems to know a lot about the book and I have a feeling he wronged Mo Hwa in the past. I bet that this was what the Second State Councilor was referring to when he said that he knows what Jae Kyung is capable of in desperate times. 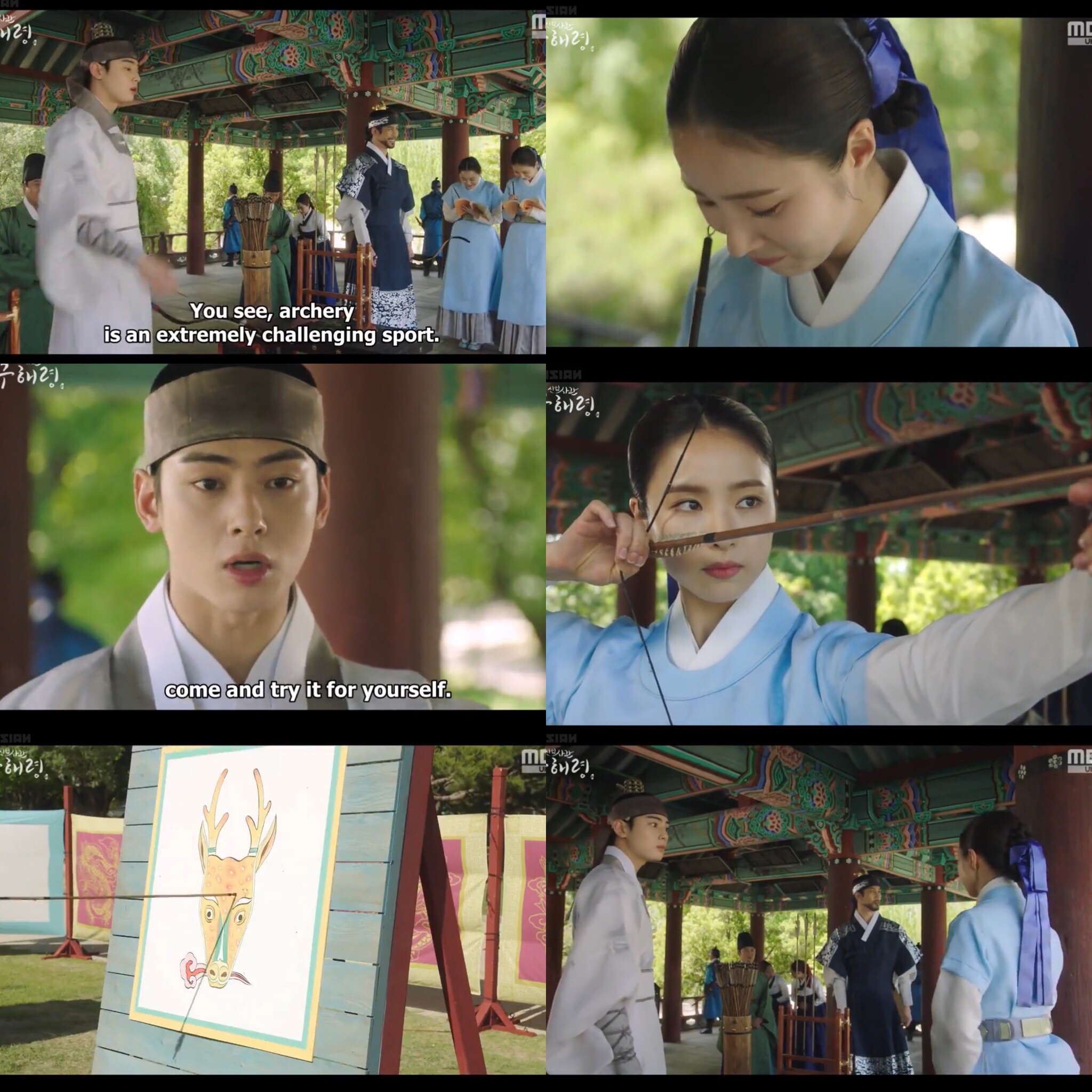 It is Hae Ryung’s turn to be the Crown Prince’s historian and instead of the usual sit through, he and Prince Lee Rim play a game of archery. Both Hae Ryung and In Im are watching and everyone laughs when the Prince misses hitting the bullseye. He challenges Hae Ryung that if she can do better than him just one time, she can laugh at him all she wants. She shows off her skills and shuts the Prince up, admitting that archery was a childhood hobby of hers. Poor guy, he’s always getting shown up by a girl, hahaha🤡

There’s no improvement on the girls’ doing their jobs right as Officer Yang continues to shout at them for performing poorly. In Im is not discouraged however as she is excited to receive their 1st pay-check today. They notice that assistant clerks are getting the rice when an Official’s name is called and are devastated when they find out that they won’t be receiving anything. There were other people who also didn’t get anything but from their reaction of just walking away, it seems like this is not an unusual occurrence. 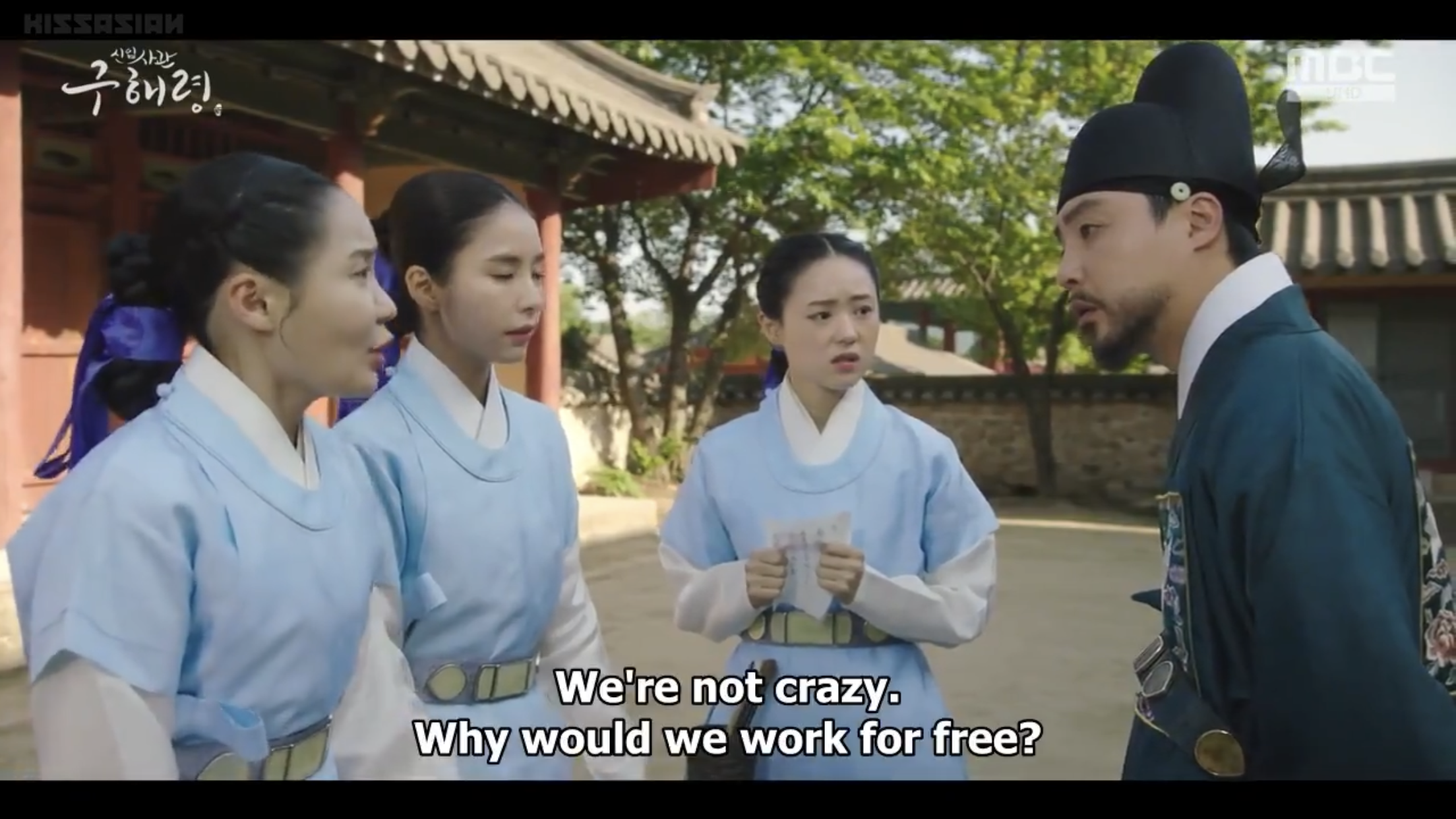 The 3 ladies have a drink that night and try to comfort In Im. They meet with the other historians in the restaurant and they announce that Officer Kim just received his full stipend today. They are horrified about this and learn that assistant clerks get something in return from officials who ask their help to collect their stipend in their place. The officials who distribute the salaries (rice) are also bribed to prioritize your name getting called. Hae Ryung is bothered by this knowledge and writes something that night. 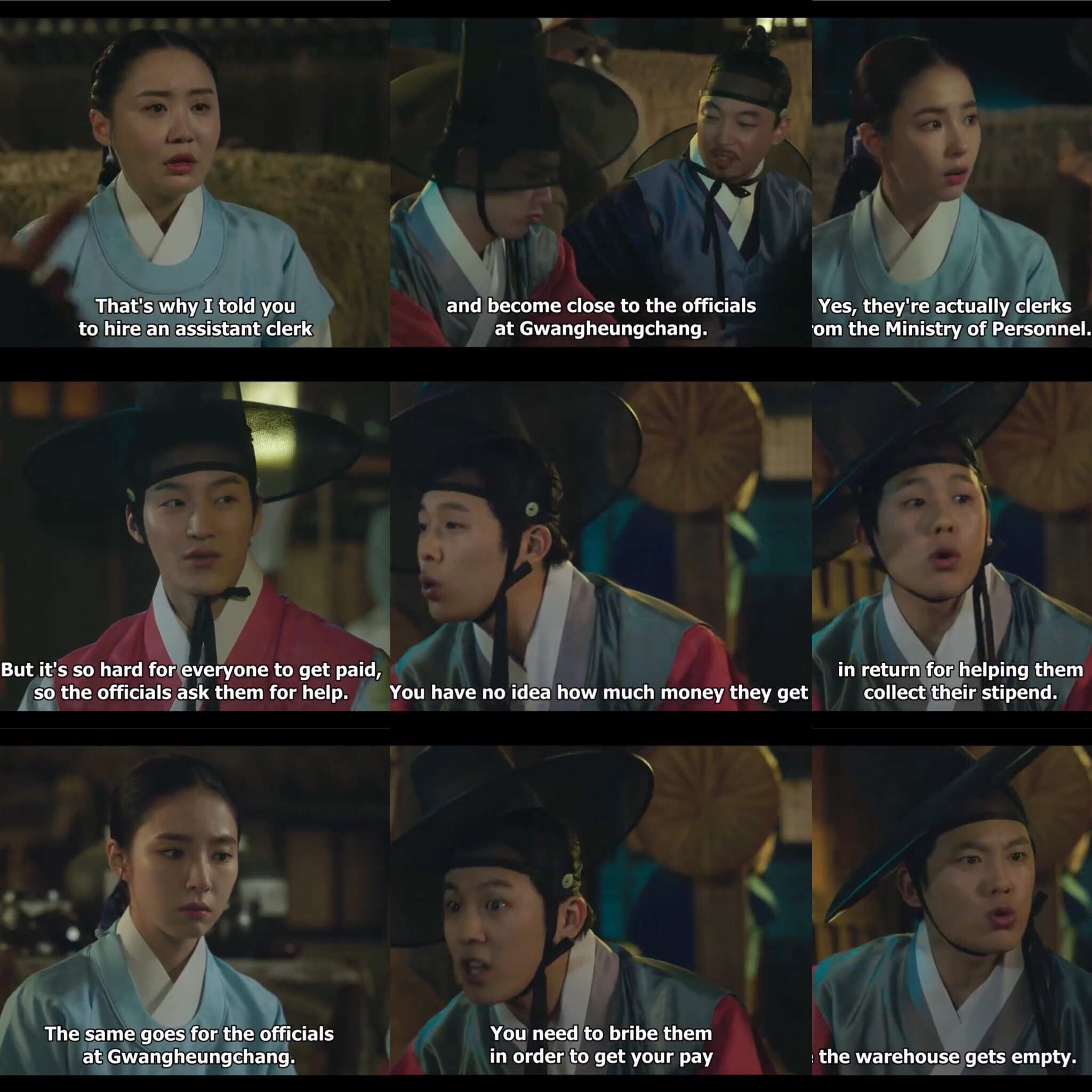 Meanwhile, Sa Hui shows the Second State Councilor her book being the spy that she is. She is mostly quiet when she is with the girls that it makes me feel like she’s really not meant to be a villain here, she just needs to do this for a personal reason. I don’t sense a sly motive from her as well given her facial expressions showing concern and agreement with the girls when they were being mistreated. Officer Min sees her leave his quarters and warns her that a historian shouldn’t be making personal connections with other people because it could backfire against her. 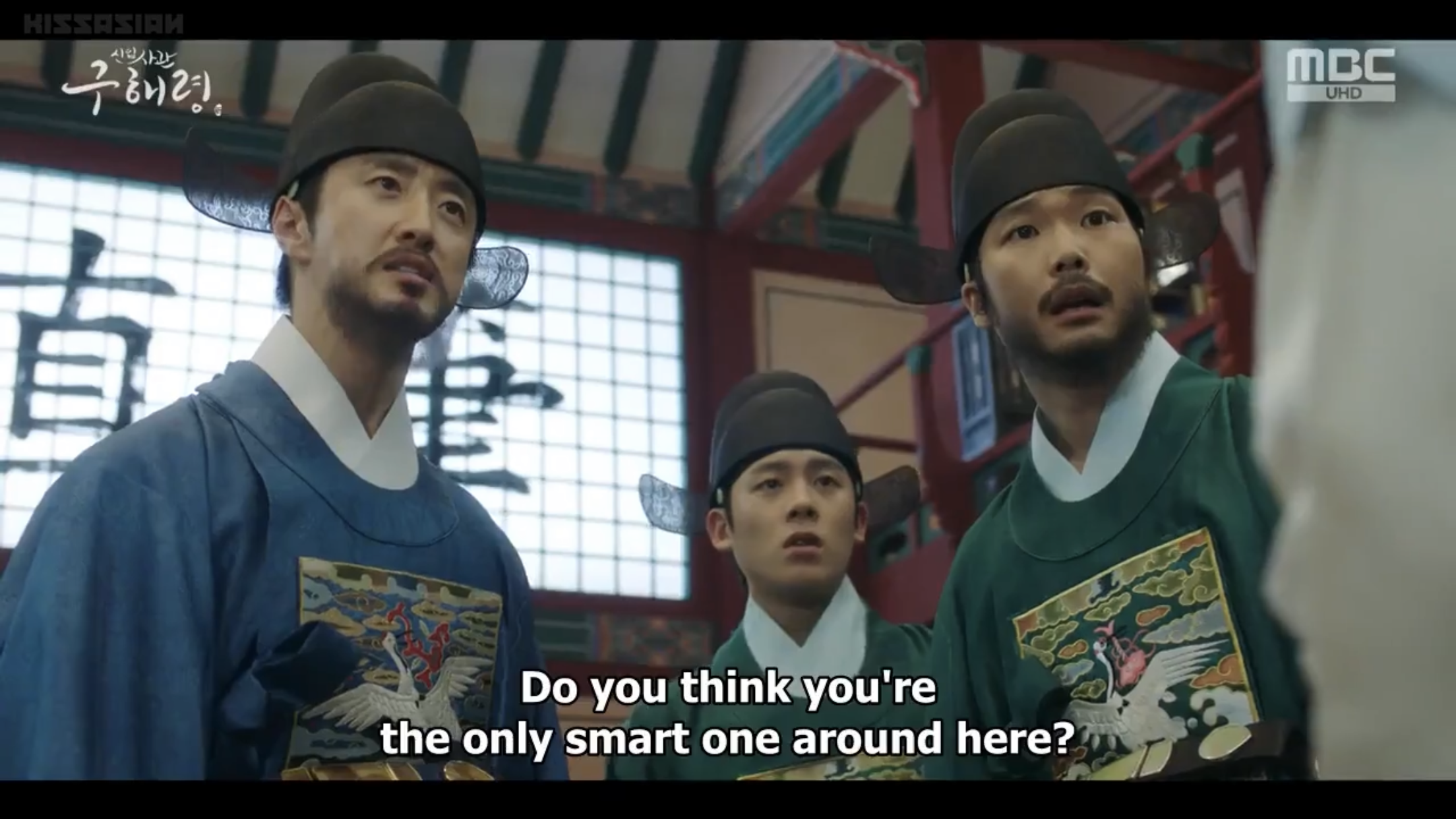 It’s a chaotic day for the historians when they find out that Hae Ryung submitted a petition to not hire assistant clerks and have officials personally collect their rice to prevent stipend corruption. She is reprimanded for her actions, but she quietly accepts the scolding and defends herself saying that she was only doing the right thing. 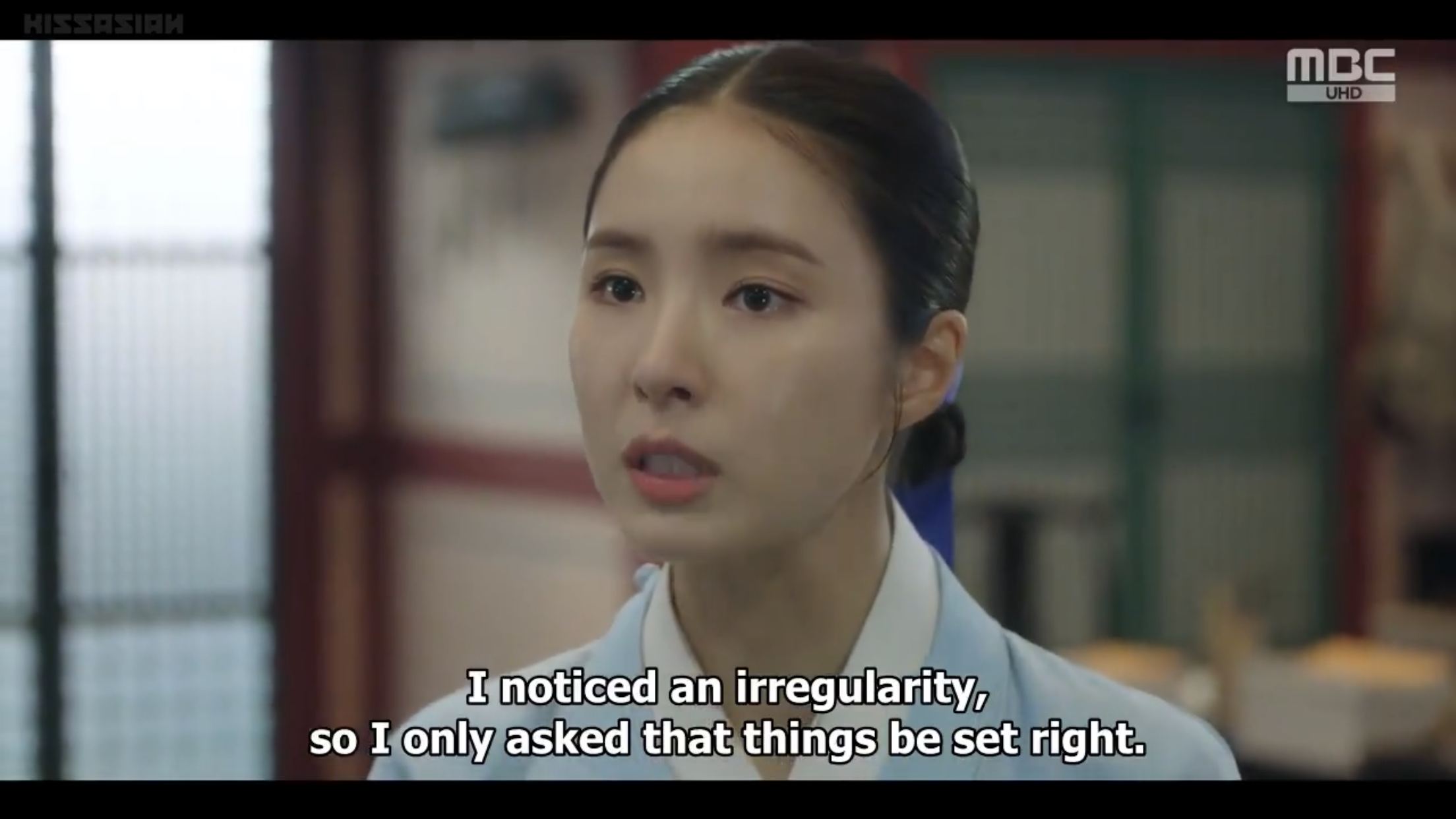 Prince Lee Rim impatiently waits for Hae Ryung and wonders why she is late. When she arrives at Nokseodang, she is sullen and does not say a peep. Hae Ryung tries to stop her tears from falling but she begins crying in front of Prince Lee Rim. He comforts her by telling her that she can cry all she wants and leaves the room to give her privacy. Hae Ryung cries uncontrollably by herself as the Prince empathizes with her. 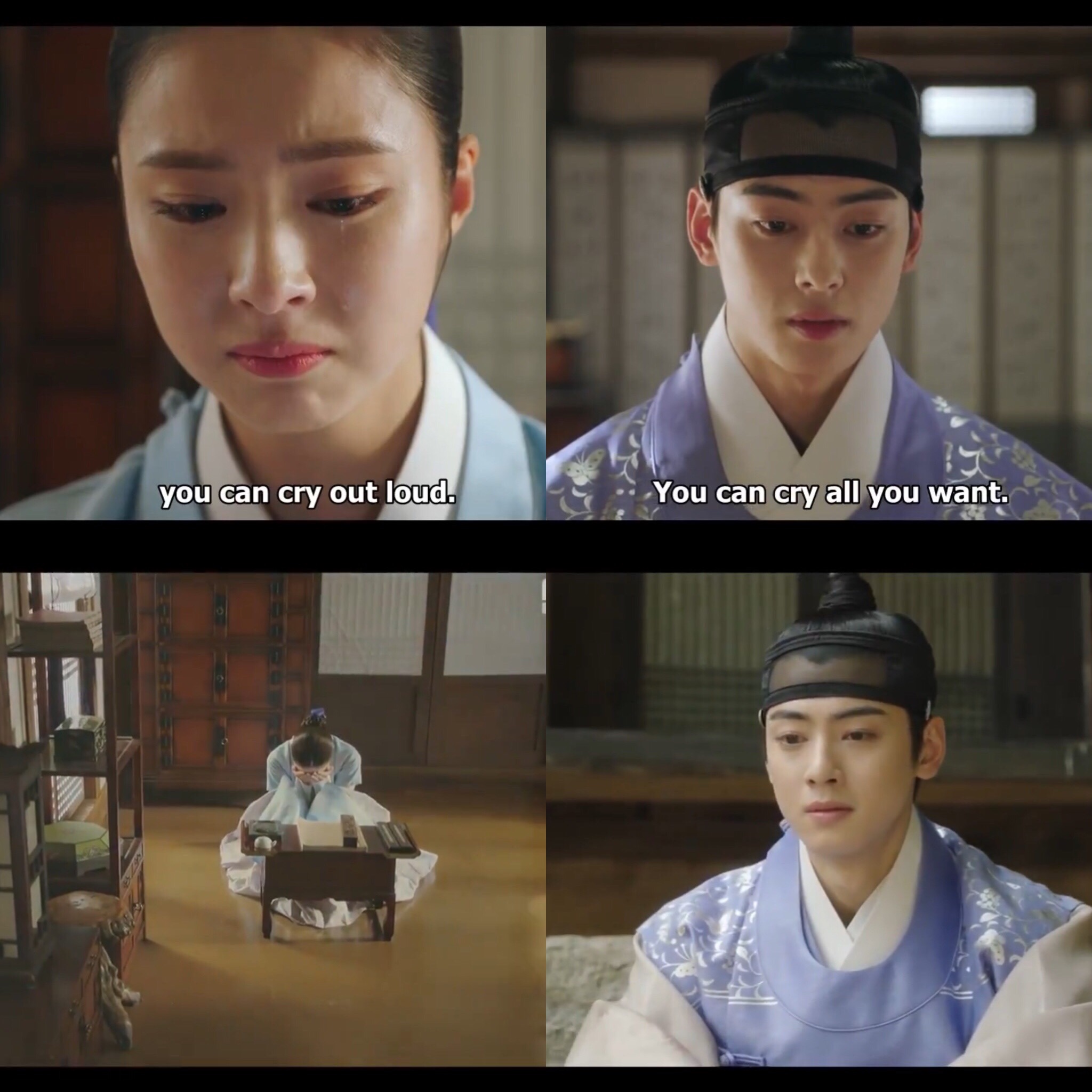 I feel so bad for the girls who have to work in a place of discrimination and have to fight tooth and nail to survive😵 On the brighter side, Rookie Historian Goo Hae Ryung is probably Shin Se Kyung’s best kdrama (for me) as she’s really showing a range of emotions here. I can feel her frustration with the rigid system but as much as I admire her conviction to pursue what is right; something as big as salary corruption, especially in that time, will be hard to eliminate. 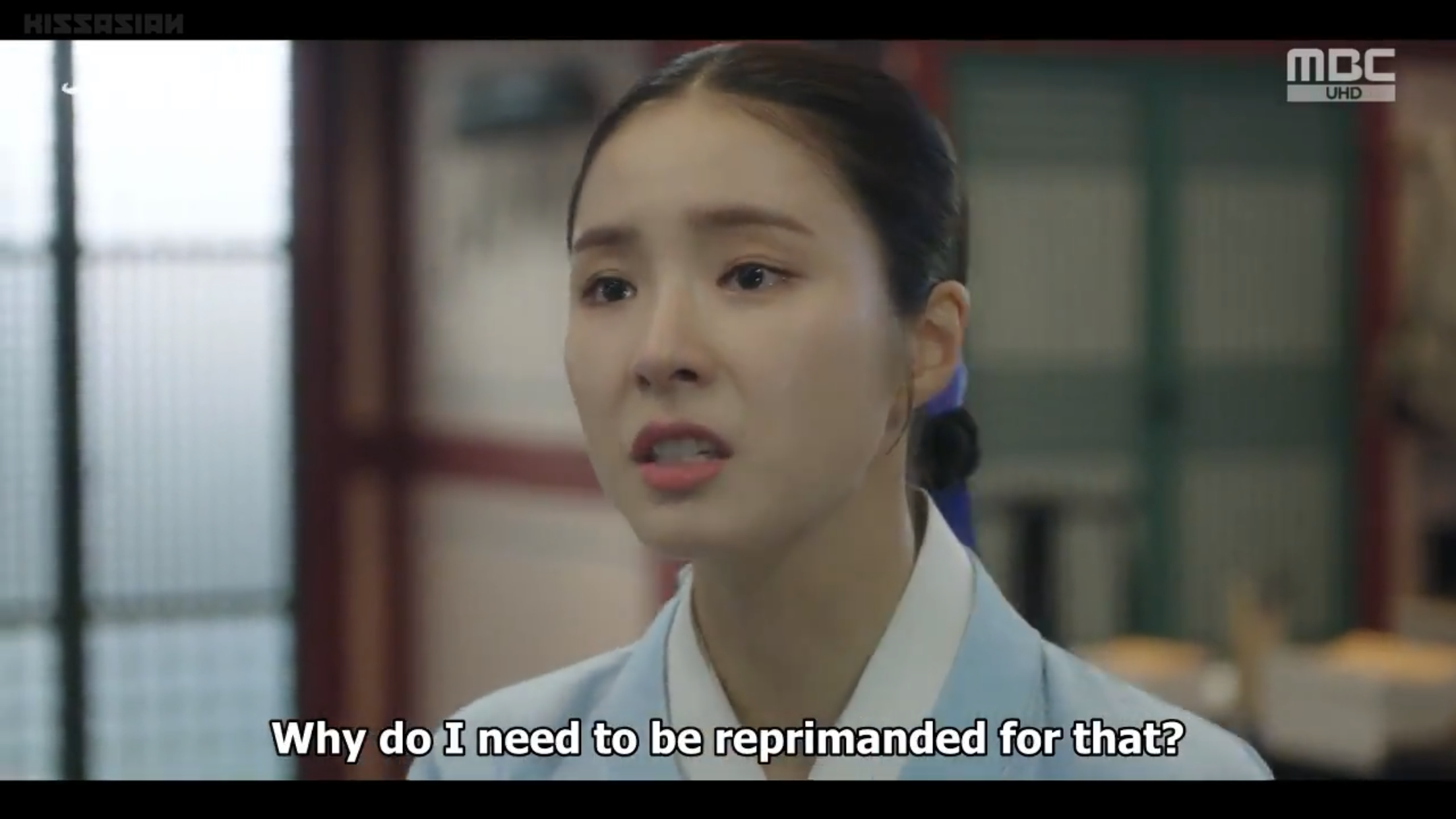 It’s unfortunate that internal problems such as the uneven distribution of stipend is not an issue that can be brought up with the King/Crown Prince because external dilemmas (Ex. Famine, Poverty, even the banned books) take precedence. It’s already customary that such a thing happens and what Hae Ryung did is equivalent to a whistle blower. I’m not sure what consequences she’ll have to face for this but knowing her, I know she’ll power through💪🏻

I think the main conflict (The Story of Ho Dam being distributed), although was further explored on these 2 episodes, took a backseat to the other conflict (Life as a female historian) of the story. I am enjoying these different angles and hope that this kdrama continues to surprise me.