No day is complete without trouble being caused in the palace. Politics and government affairs are like bread and butter — they go hand in hand no matter what era. Expect a target on your back as long as you possess an advantage whether by familial relations or by merit.

With the rain not letting up, Hae Ryung and Prince Lee Rim find themselves seeking shelter under a large rock. The Prince hesitates to hold her hand but musters up the courage to do so and Hae Ryung does not move away. Their moment is interrupted when her friends’ voices call out her name. Hae Ryung helps the Prince find his way back by teasing that there are tigers in the mountain so they need to go together.

Hae Ryung asks the Prince if he wants to hold her hand with the reasoning that when she was young, her older brother would hold her hand in the mountains so she wouldn’t get scared anymore. She reaches out her right hand to hold and the Prince declares that he doesn’t have an ulterior motive in agreeing to this. Riiight😏 As they walk hand in hand down the path, they hear A Ran and In Im’s voices looking for her. She pushes the Prince to a nearby bush to hide him and the girls find her. She tells them to go ahead first and just as she was about to help him up, she lets go of his hand when the girls call her again, hahaha! 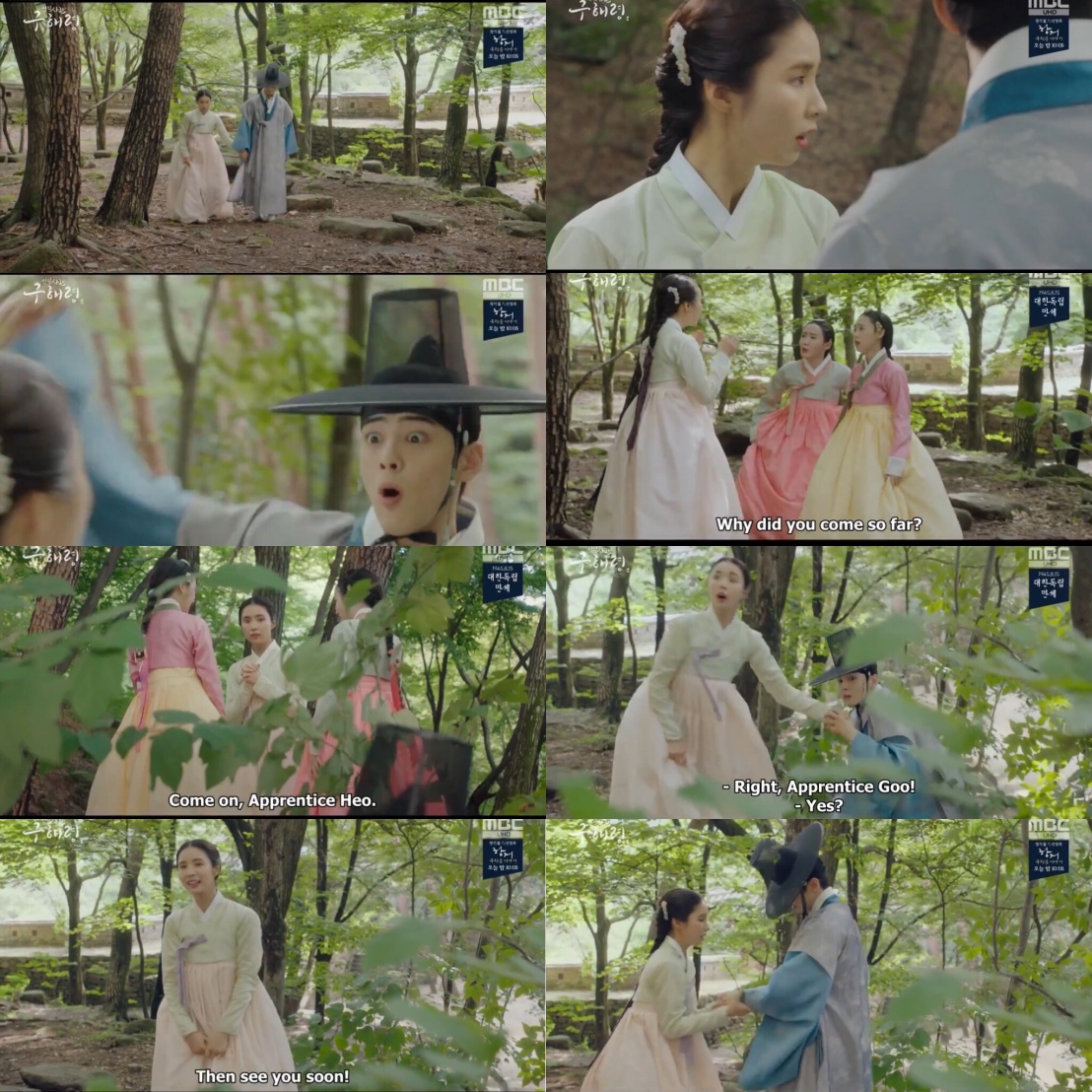 Several eunuchs are waiting outside Sa Hui’s house to curry favor with her father. They hand him a paper with their name and rank for him to get to know them and possibly get transferred to a higher ranking or better government position. When the appointment paper arrives, 3 historians are disappointed because they spent a lot of money to get in good graces with the higher ups but discover that their names are not in it. Hae Ryung takes the Record of Appearance book since changes in positions mean that they have to update the book as well. She finds discrepancies in the addresses of a number of newly appointed officials and investigates herself where they really live.

She reports the irregularities to Officer Yang and Officer Min interjects that the change in address must be due to the Kinship Act (A ban on people working in the government office where they reside). It causes a ruckus inside the Office of Royal Decrees as they all double check the information for themselves. Once they had verified that the details were indeed forged, Officer Hyeon (A**hole🤬) points to Sa Hui pertaining that her father is the culprit.

Officer Min takes the appointment list without a word and heads directly to the Section Chief’s quarters. He confronts him about forging the addresses and says that he cannot write the new certificates of appointment. Sa Hui’s father admits to this eventually, explaining that appointing people in their own hometown is good since they ought to know their own village and must know the people better too. Officer Min disagrees arguing that such connections lead to lax enforcement and corrupt decisions. The Section Chief is pissed and boasts that he is good friends with Officer Min’s father and that this is no way to treat him. He does not budge with this fact and leaves the room anyway.

A new day means another meeting at the Royal Court. One of the officials is hesitant to read a petition but the Crown Prince insists that he continues with it. The petition is a request to impeach Officer Min as a historian because of his past about that his father-in-law was branded as a traitor to Joseon and how his wife committed suicide because of this. One side defends while the other side supports the issue. The Crown Prince orders Officer Min to leave the room for his sake.

The news reaches the Office of Royal Decrees and the female historian find out about Officer Min’s unfortunate past. It becomes a backbiting session as the Scribe who came says that he wasn’t qualified to become a historian in the first place and it was only because of his father why he got the position. Officer Hyeon (Yes, you’re an a**hole👿) chimes in that Officer Min’s tainted past with his father-in-law should have been considered when hiring him. As Officer Min walks in the room, Officer Yang assigns both of their work to someone else and they head out.

Both historians went out for a drink. I was surprised at Officer Yang’s concern to be honest because he acted indifferent to Officer Min and got along with the other historians more. At the other table, other officials are gossiping about Officer Min and mock his character. They even go so far as insulting his wife and he tries his very best to keep his anger at bay.

Hae Ryung is requested by Officer Min to go to the Crown Prince’s chambers with him. Officer Min gives his letter of resignation to the Crown Prince with the latter profusely refusing it. He reminds him that the reason he became a historian was to right his father’s wrongs. Even if he passed the state exam with flying colors, he decided to start from the very bottom rank as a historian. Officer Min admits that he cannot take people talking ill about his deceased wife and bows respectfully to Crown Prince Lee Jin. Officer Min’s character has been nothing but admirable, but it’s only natural that jealous people will undermine his authority. Hae Ryung tries to convince him to stay but to no such luck. 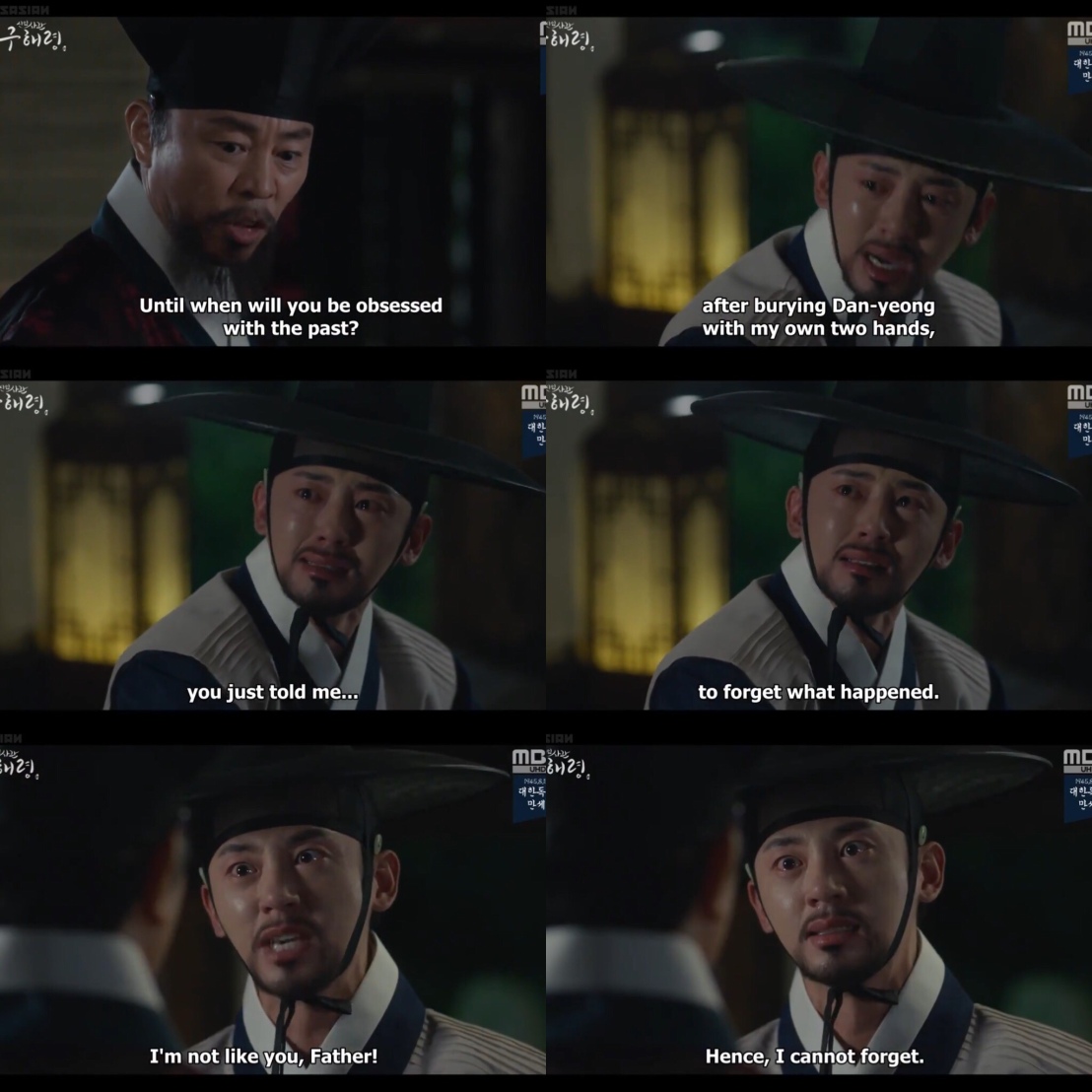 Later that night, the Second State Councilor informs Officer Min that he agrees with his resignation. The latter asks the former on why he did that to his wife (Dan Yeong) and he lashes out that a lot of people suffered because of him. He is infuriated that his father said the same thing to forget about the past when he simply cannot because Officer Min is not like his dad.

He visits his old house and memories come flooding back of a happier time when his wife was still alive. He was a different man back then — affectionate, sweet, and more talkative. Another flashback reveals how his wife begged the Second State Councilor under the pouring rain to spare her father because the latter was suspected of plotting a conspiracy. She cried and pleaded for his forgiveness but we all know what happens next…

Officer Min finds his wife having hung herself a few days later. Back in the present, he caresses a handkerchief that his wife had made before with both their names embroidered on it. As he quietly weeps for her, he does smile probably remembering their good memories together.

It’s a quiet day at the office as the elephant in the room of Officer Min resigning hangs heavily with everyone. It’s only when Officer Hyeon (Yes, this is a 3rd time I’m saying it. He is an a**hole to his very core🤮) comes in, happy and beaming, that noise fills the room. He expects to be promoted now that a position has become vacant and even sits at Officer Min’s chair to imagine the feeling of moving up a rank. He is stupefied when Officer Min walks in and hits his leg on the table, HAHA🤣 Officer Yang treats him the same way as he always has and smiles. It’s been awhile since the focus was on Prince Lee Rim, but he’s up next as he is bored waiting to see Hae Ryung. Sam Bo tells him not to be too available and play hard to get with her, but he is wary of this idea. Officer Min and Hae Ryung take a walk and he apologizes to Hae Ryung and she teases him to try saying thank you in a sweeter and more informal manner. It’s a shame though because I think she’s the only one who can bring out the side of him that he had lost but it’s looking like just a blooming friendship at this point. Crown Prince Lee Rim and his group see them walking and calls for them. He tells Hae Ryung that he needs her at Nokseodang but Officer Min states that he needs to tell her the reason why she is being summoned. An awkward silence follows until Hae Ryung gestures that it’s okay and that she’ll be back at the office.

Hae Ryung asks if there’s anything he’d like to say and he expresses that he is frustrated not knowing anything about her. She begins telling him bits of facts about her family, hobbies, and a little about her childhood. She also confesses that the story about her brother holding her hand was a lie. He doesn’t probe too much on why and smiles in content with their conversation.

Officer Yang is told by Officer Song that he saw the Second State Councilor heading to the King to talk with him. He is worried that when Officer Min finds out, he’ll want someone to record their conversation; but since it’s held in the Inner Palace, it’s technically outside a historian’s jurisdiction. Just then, Officer Min overhears them talking. The next scene immediately shows Hae Ryung sneaking outside the King’s chamber as per Officer Min’s instructions. She overhears the Second State Councilor ask the King if he is hiding anything about Prince Lee Rim, but 2 guards suddenly spot her lurking around. Sorry if I’ve been repeating my sentiments but it just goes to show how much I love Rookie Historian Goo Hae Ryung!😊 I feel like Shin Se Kyung is her most versatile here as she makes jokes, smiles spritely, and has a different set of facial expressions compared to her previous kdramas. She is my kind of heroine and I hope she continues her trajectory to influencing change in the palace. Even if she ends up in trouble😅 I’m convinced now that there is no love triangle between Hae Ryung, Prince Lee Rim, and Officer Min anymore. It was only a small tease but these 2 episodes confirmed that Officer Min is not ready to move on from Dan Yeong yet. I love the background they gave to him, it was a startling revelation, but it adds color to why his character is portrayed the way he is. People may mock his inflexibility and initial advantage, but he got to where he is because he is a man of principle and no one can take that away from him.